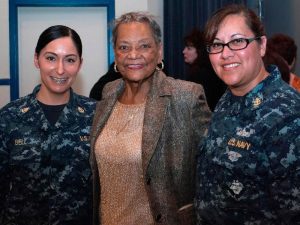 Have you ever heard of Raye Montague?  Like most people, I hadn’t either- not until I read her obituary. What she did was amazing.

During the Vietnam War, the Navy spent 2 years unsuccessfully trying to create a computer program to design ships.  Raye was charged with completing that task in 6 months.  [She said her boss didn’t like her – probably because she was black- so we can assume he was hoping to find a way to fire her].  Bottom line- she created that program in the time allotted.

Nixon learned about that program and wanted her to use it to design a frigate.  The process normally took 2 years.  Her boss [still no fan of hers], told her she needed to get it done in one month.  In less than 19 hours- the frigate was designed by the software she created.  She literally changed the way ships were designed from that time forward.  How many other women have had their significant contributions overlooked?  I bet there are plenty more.

You can read more about her story in the article published by the Smithsonian.