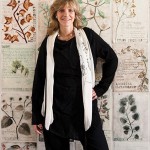 Dr. Laura Esserman, Director of the UCSF Carol Franc Buck Breast Care Center is a physician, researcher, and innovator who is changing the future of treatment for breast cancer.  With her combination of brains, passion, tenacity, empathy and energy- she’s unstoppable.

I originally met Laura through Jeff Pfeffer, Professor of Organization Behavior at Stanford’s Graduate School of Business.  She had been an MBA student of his while doing her residency at Stanford Medical Center and taking care of her newborn child.  In an interview, she told me her “energy feeds off doing something new and creative.”  It’s a good thing given how many challenges she’s taken on at once.

She cares deeply for her patients.  For those needing surgery, she asks them what song they want her to sing to them as they go to sleep in the operating room.  [She has a beautiful singing voice- in case you’re wondering].  She does what she can with available resources but she’s pissed off about the slow advancement in breast cancer treatment. 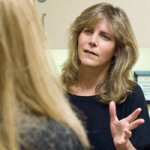 Most research is done on women with advanced stage cancer using a drug development system that is very slow and very expensive.  Clinical drug trials are not coordinated with clinical treatment.  She was determined to change the model for drug trials, making it faster, more efficient and focusing on early identification and targeted treatment.

Her underlying concept was applying personalized medicine to breast cancer diagnosis and treatment.  Biomarkers could be identified for each patient that would indicate likely response to select drug molecules.  That method is currently used in determining who is treated with Herceptin.  Laura was convinced that type of approach could and should be used to map out what markers showed positive response to which drug molecules working with earlier stage patients.

In reality, what she aimed to do was change the process of drug development and approval that has been around for more than half a century and has lots of stakeholders (e.g., drug companies, doctors, patients, FDA).  Laura knew that to turn this idea into reality, she needed partners.  One person she enrolled early on as a co-conspirator was Anna Barker, Deputy Director of NCI, someone experienced in navigating the governmental processes in Washington DC.  With some additional support, they developed a proposed for a radically different alternative.

First, it would involve many different drug companies.   Each company would be given a class of drugs to test.  To be included, the company had to sign an agreement stating it would share results with all participating companies. If a company refused to share results, it was not included in the study.  Sharing findings would make it possible to test a variety of drugs faster and more cheaply- enabling all the companies to pursue additional research as desired. 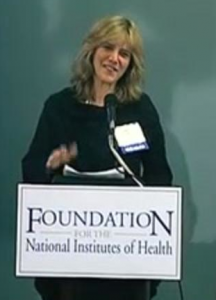 The other major change was allowing the design of clinical trials to be modified when needed without having to go back to the FDA for approval.  These were major departures for how drug development is usually done.  It took patience and persistence to shepherd the proposal through all the the layers of approval but Laura- and Anna- succeeded.

The result:  I-SPY TRIAL (Investigation of Serial Studies to Predict Your Therapeutic Response with Imaging And moLecular Analysis) and now I-SPY 2 TRIAL.  Trials are currently underway in 20 locations with more planned for the future.  There will come a time when breast cancer can be treated earlier and with more success.  And you can thank Laura Esserman for that.