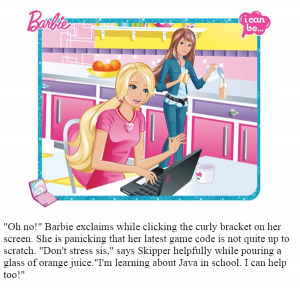 There’s an old  saying:  ‘the road to Hell is paved with good intentions’.  I believe Mattel had good intentions when it published Barbie: I Can Be a Computer Engineer.   It just did it completely wrong.  Sadly, the players involved were all women.

The denizens of social media did a terrific job attacking the negative message communicated to girls by the book.   In response, Mattel has [wisely] pulled it.  Better yet, women who are computer savvy have rewritten it in ways that reflect the competence girls and women have in Computer Engineering.  One version is by Casey Fiesler, a doctoral student at Georgia Tech getting her degree in Human-Centered Computing.  You can read about and download her version here.  Meanwhile, a crowdsourced revision is being crafted at Feminist Hacker Barbie.

The silver lining behind this cloud is the renewed attention it has brought to the misrepresentation of women in technology (this story got picked up by some major news sources) and the creation of a couple of kick-ass alternatives.