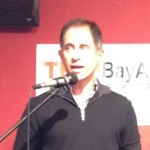 Last night, I heard Adam Lashinsky, author of the just released book, Inside Apple, at TEDxBayArea.  He started his talk by saying that Apple breaks all the rules taught in business school.  I would add- it also breaks the rules of creating a culture of innovation.  When working with clients on creating an organization that fosters innovation, I use Google, 3M, Toyota as examples, not Apple.

Many of the things Lashinsky spoke about are the characteristics that would normally kill the ability of a company to innovate.  He made an interesting comment:  Apple is an entrepreneurial company but it does not have a lot of entrepreneurs.  Interesting comment.  Proof?  While many executives at Oracle have left to start companies of their own, that is not really true of Apple.  So what are some of the unique ways in which Apple has worked?

Jobs was a micromanager and that focus on details by every level of management permeates the organization.   Micromanagement is not what is taught in business school- nor would it support creative thinking in most organizations. But it has worked at Apple.

It has a culture of secrecy.  Even within Apple, people don’t know what’s happening with the people around them.  Employees working on some piece of a new product will have no knowledge of which other teams are working on different parts of the same product. they won’t necessarily even know what the product will be.   They find out when they see the product launch on closed circuit TV the day that the general public sees it.

Related to the secrecy, Lashinsky said that Apple was unique in how it kept the press at arms length EXCEPT for product reviews.  They didn’t want stories written about the company or its execs, just the products.  He speculated that it was because of Jobs’ declining healthy that they allowed him [Lashinksy] to do an article on “Tim Cook:  The Genius Behind Steve Jobs.”

One thing that Jobs/Apple did better than most companies that contributed to its ability to innovate was saying “no”.  That meant staying focused on what fit with Apple’s product line and leaving some opportunities on the table.  That is something other companies could learn from.

What will happen now that Jobs is gone? That’s anyone’s guess. Because there is a team of execs who have been steeped in the Apple culture taking the firm forward, my guess is it will continue to thrive.    What do you think?