In my previous post, I mentioned traveling to Stockholm in January (which is definitely not tourist season there).  I had been invited to speak at the Forest Beyond conference sponsored by Innventia, KTH, & Vinnova.  The theme was creating new businesses based on forest products.  My particular talk was on creating a culture of innovation.

While we were attending the conference sessions, there were 6 teams working on new product ideas with  each team being given a newly developed product derived from trees.  There was a plastic like compound- like very rigid styrofoam- that was biodegradable, a heavy duty corrugated cardboard – also biodegradable, a thin plastic-like film that had 3-D images built in, and fabrics from plant materials.  The teams were supported by trained facilitators as well as experts who visited each team to share different perspectives to help them broaden their thinking.

One of my favorite ideas was for the use of the corrugated cardboard.  The team proposed using it to create tents that could be shipped flat and used at big outdoor festivals like Burning Man.  During the day, they could be used as a sofa, at night, as a sleeping tent.  They suggested that a company could sponsor the cost in return for having their name on the product.  And, at the end- they would be easy to dispose of and any left over would eventually decompose. Cold outside?  There already exist paper-based sleeping bags that ship in very small space (compacted) and can withstand a reasonable amount of moisture before decomposing.  The first photo is the prototype;  the second is a rolled up paper sleeping bag that has been decompressed. 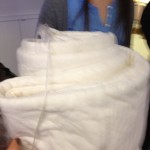 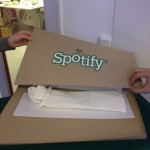 The conference itself was wonderful and the team projects highlighted what can be done- if you set your mind to it.  It was a great experience.